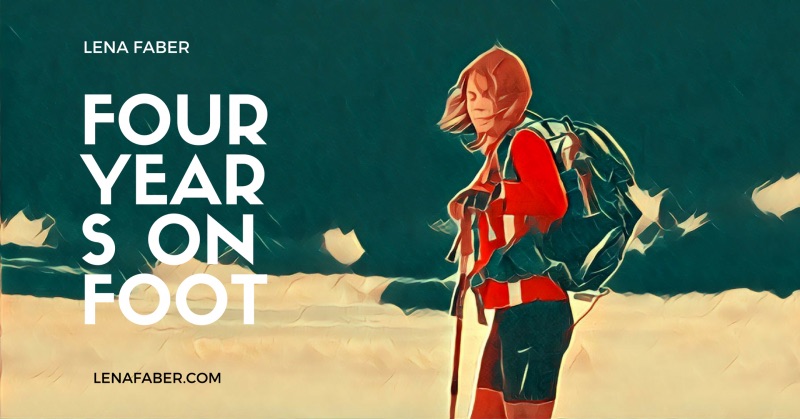 By that time the children had already grown up, so I just bought a ticket and flew … to the Kalahari Desert, 2008. Remember the movie? Gods Must be Crazy-2? A must watch. I always wondered if one day I could run like the bushmen in the movie.

CAMDEN – Four Years On Foot: The price of a journey. Lena Faber shares stories and photographs from her journey from Cape Town to Camden. She will speak at the Camden Public Library on Thursday, Sept. 27,  at 7 p.m.

“The price of this journey turned out to be unexpectedly way too high, and money is only a small part of this price. So what do you find and what do you lose when you try to get out of the matrix?” said Faber, in a news release.

Faber was on a Cape Town road trip when her car was broken into. All her trail-running and mountain bike gear, her racing trophies, as well as a Nikon camera with footage intended for the next exhibition – gone.

On the first day she cried. On the second, she gave away the rest of her belongings to her maid and gardener, said goodbye to her husband, and flew across the Atlantic with a 13 lbs backpack for her four years’ journey starting at the Appalachian Trail, where immediately she was given the trail name ‘Brave’ from fellow hikers, once they learned her story. She didn’t get back home.

Luxury-resorts-foreigner yet a prominent trail runner, she found herself on Appalachian Range with no clue what hiking was about in general and the Appalachian in particular, 2180 miles from Georgia to Maine. She spent an hour on the phone with an AT manager named Laurie, and two days in a hotel reading about bears and snakes.

She was crying from fear at the last six miles of the dirty desert road to Springer Mountain, thinking she would be the only human for 100 miles and would turn into Mowgli. Fellow hikers didn’t see her tears and thought she was brave with all her stories and gave her the trail name ‘Brave.’ People always say that she is brave and she is always about to ask “how you know my trail name?!”

Her life was far from sports and the outdoors. She was a talented journalist, a big city girl, a 5-star resort customer. It was a complicated marriage, a much more complicated divorce, about-to-marry her divorce attorney, raising two kids on her own, a nightlife with parties and no boundaries between the journalist job and life itself, and her biggest love.

“By that time the children had already grown up, so I just bought a ticket and flew … to the Kalahari Desert, 2008. Remember the movie? Gods Must Be Crazy-2? A must watch. I always wondered if one day a surgeon could fix my foot so I could run like the bushmen in the movie, but I struggled to walk a single mile. That’s how badly my foot was damaged by the fancy shoes of my teens.

“I participated in a multi-day ultra-marathon through Kalahari. Being not one bit a runner, I just used the opportunity to go wild in the desert. Never in my dreams did I think that very soon I would become a top South African runner.

In the desert, I met my future husband, a former radio DJ. Soon a surgeon fixed my foot, I started faculty teaching at the University of South Africa, won an international photo contest with following up personal exhibition Iron Africa and in the meantime trained for speedrunning. Soon I got a silver medal for 10 k in the US at the 2011 World Masters Athletic Championship.”

Day by day life was getting boring, together with a former DJ. Every day the same – a yacht club with beer, a golf club with beer, and a restaurant. With beer. So “One day, 2014, for no particular reason, I decided to go for a little run”. For this “little run” I bought an ultralight tent and sleeping bag, even though I hated camping, and flew across the Atlantic to hike the Appalachian Trail from Georgia to Maine.

“And I figured, since I run this far, maybe…” and I cycled the Route 66 from Chicago to LA and the East Coast from Maine to Florida.

After that, I finally yielded (I didn’t like Tom Hanks) to the insistence of my children and watched Forrest Gump. And I figured a couple of movie quotes above saved a lot of writing. The rest will be on my book Four Years On Foot. Hopefully, soon. I recently stopped at the Midcoast of Maine. “For no particular reason.” Or…?”