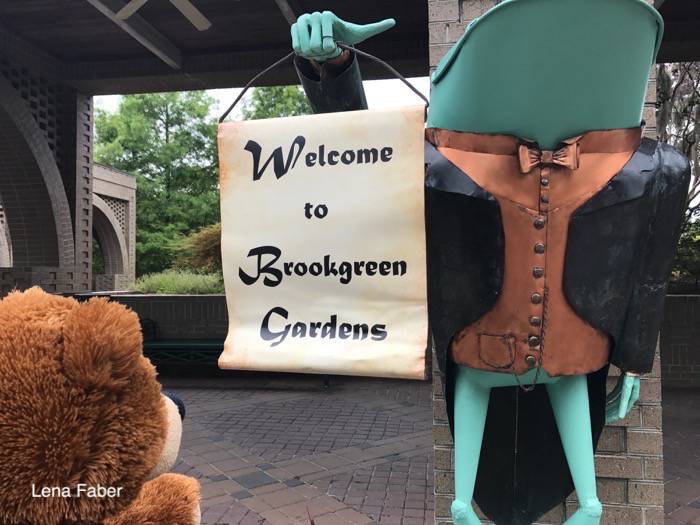 Alligators were living in this lake, and Liz told they were peaceful, but…

– I was sleepy next morning, when, following their advice, cycled a bit back to see Brookgreen Gardens.

The manager, a cyclist himself, introduced me to the staff and volunteers.

When they asked a common question “where do you stay overnight”, I gave a common answer “on people’s backyard”. And Liz invited me to stay at her place.

– After a tour in the Brookgreen Gardens we drove to the same street I was the last night. Liz happened to be neighbors and friends with Anissa!
– The lake was on Liz’s backyard, so we kayaked straight from there.

Alligators were living in this lake, and Liz told they were peaceful, but… So we didn’t explored bushes on the other side.

Liz’s friends came for a dinner, we enjoyed chatting probably more then food, they were very nice though.

– In Charleston a local cyclist, Ethan, approached me. He were cycling home from his work. As it was on my way along the East Coast Greenway, I stayed with him and his wife Allison. They told that after a while the beautiful trail would turn into a R17 with narrow shoulders. I check the map, and it it was not just till Savannah, but Jacksonville.

– Next morning I’ve got a ride, changed three cars, to Amelia Island, took a ferry, end up on Jacksonville Beach at night, and ran into the church out of the rain.

– The guy, who was working there, brought me to his porch, where I spent last night. If I’m right, I will have deal with thunderstorms every night. A very special season in Florida.